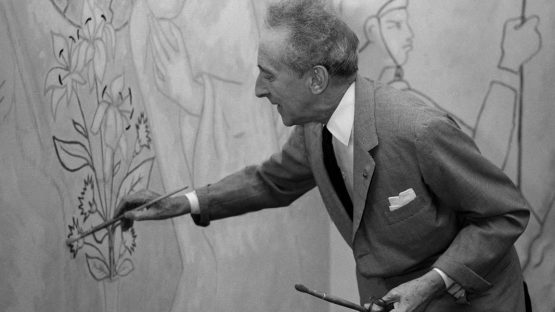 Cocteau was born in Maisons-Laffitte, Yvelines, a town near Paris, to Georges Cocteau and his wife, Eugénie Lecomte; a socially prominent Parisian family. His father was a lawyer and amateur painter who committed suicide when Cocteau was nine. From 1900–1904, Cocteau attended the Lycée Condorcet where he met and began a physical relationship with schoolmate Pierre Dargelos who would later reappear throughout Cocteau’s oeuvre. He left home at fifteen. He published his first volume of poems, Aladdin’s Lamp, at nineteen. Cocteau soon became known in Bohemian artistic circles as The Frivolous Prince, the title of a volume he published at twenty-two. Edith Wharton described him as a man “to whom every great line of poetry was a sunrise, every sunset the foundation of the Heavenly City…”

In his early twenties, Cocteau became associated with the writers Marcel Proust,André Gide, and Maurice Barrès. In 1912, he collaborated with Léon Bakst on Le Dieu bleu for the Ballets Russes; the principal dancers being Tamara Karsavinaand Vaslav Nijinsky. During World War I Cocteau served in the Red Cross as an ambulance driver. This was the period in which he met the poet Guillaume Apollinaire, artists Pablo Picasso and Amedeo Modigliani, and numerous other writers and artists with whom he later collaborated. Russian impresario Sergei Diaghilevpersuaded Cocteau to write a scenario for a ballet, which resulted in Parade in 1917. It was produced by Diaghilev, with sets by Picasso, the libretto by Apollinaire and the music by Erik Satie. The piece was later expanded into a full opera, with music by Satie, Francis Poulenc and Maurice Ravel. “If it had not been for Apollinaire in uniform,” wrote Cocteau, “with his skull shaved, the scar on his temple and the bandage around his head, women would have gouged our eyes out with hairpins.” He denied being a Surrealist or being in any way attached to the movement. Cocteau wrote the libretto for Igor Stravinsky’s opera-oratorio Oedipus rex, which had its original performance in the Théâtre Sarah Bernhardt in Paris on 30 May 1927.

An important exponent of avant-garde art, Cocteau had great influence on the work of others, including a group of composers known as Les six. In the early twenties, he and other members of Les six frequented a wildly popular bar named Le Boeuf sur le Toit, a name that Cocteau himself had a hand in picking. The popularity was due in no small measure to the presence of Cocteau and his friends. 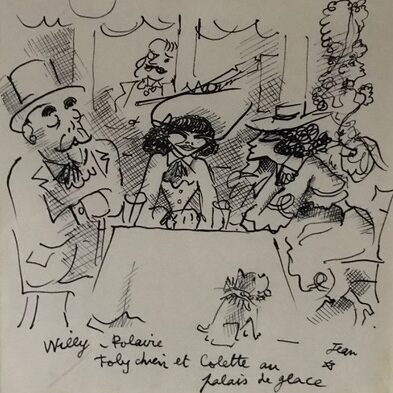