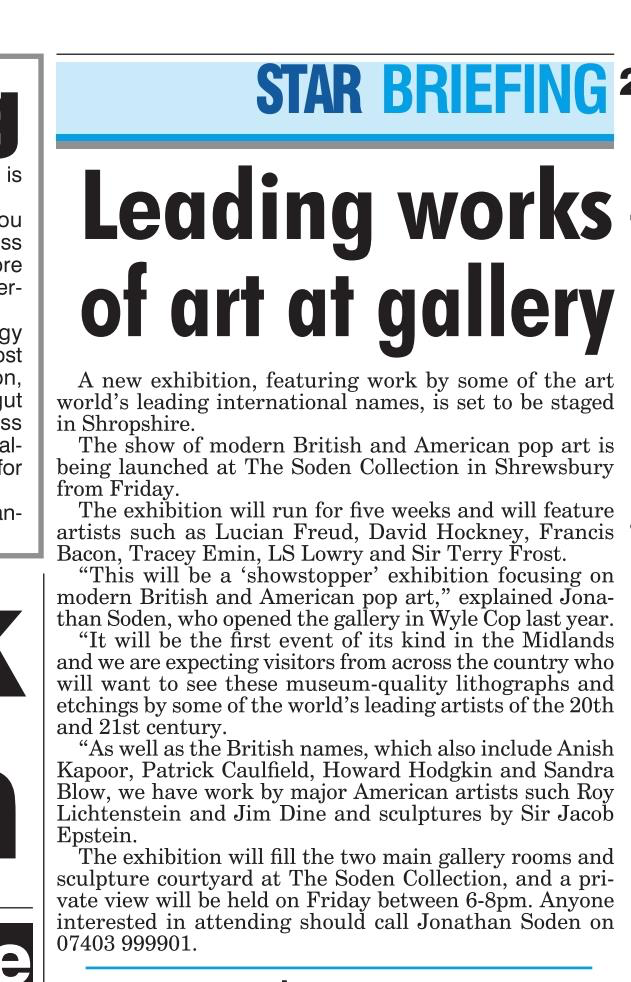 A new exhibition, featuring work by some of the art world’s leading international names, is set to be staged in Shropshire.

The show of modern British and American pop art is being launched at The Soden Collection in Shrewsbury from June 29.

“This will be a ‘showstopper’ exhibition focusing on modern British and American pop art,” explained Jonathan Soden, who opened the gallery in Wyle Cop last year.

“It will be the first event of its kind in the Midlands and we are expecting visitors from across the country who will want to see these museum-quality lithographs and etchings by some of the world’s leading artists of the 20th and 21st century.

“As well as the British names, which also include Anish Kapoor, Patrick Caulfield, Howard Hodgkin and Sandra Blow, we have work by major American artists such Roy Lichtenstein and Jim Dine and sculptures by Sir Jacob Epstein.

“This is a huge deal – London has a few commercial venues specialising in these artists but these works very rarely make it outside of the capital.

“Our gallery was recently described by a Swiss visitor as being ‘The Tate of Shropshire’ which is extremely flattering and very apt as there is a major retrospective of Patrick Heron, one of Britain’s most acclaimed artists, running at Tate St Ives at the moment and we also have four of his paintings here.

“We are very excited about the whole event and really looking forward to welcoming customers here to Shrewsbury.”

Prices for the pieces on sale will range from £250 up to several thousands of pounds for the most exclusive works.

The exhibition will fill the two main gallery rooms and sculpture courtyard at The Soden Collection, and a private view will be held on Friday 29th June between 6-8pm. Anyone interested in attending should call Jonathan Soden on 07403 999901.

I am so pleased to be able to introduce some fantastic British Contemporary Art into Shrewsbury.

There are some great[…]