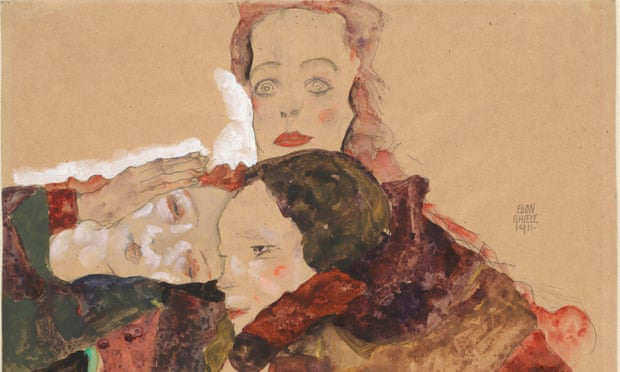 A model lies on her back on soft pillows, clutching the flesh of her raised left thigh as, with her right hand, she strokes her clitoris. Her eyes close in enjoyment. The artist watches with a pleasure his drawing fully communicates.

When I saw this drawing the caption next to it seemed to be in the wrong place, for it was labelled as a work by the notoriously sensual Austrian artist Egon Schiele. In fact the drawing is clearly signed, in elegant art nouveau capitals, GUSTAV KLIMT. Like pupil, like teacher. The Royal Academy’s mix and mashup of drawings by Klimt, born in 1862, and his protege Schiele, born in 1890, is a surprising, enriching, rewarding comparison of two geniuses who influenced and supported each other and whose imaginations turn out to have much more in common than I thought.

On the face of it – the textbook version of art history – Klimt was a successful insider whose art, once lauded, looks contrived and a bit too easy now. This may just be the consequence of having his masterpiece The Kiss sold as an Athena poster in the 1980s. Partly though it’s the result of Schiele’s rediscovery. David Bowie imitated Schiele self-portrait poses and Tracey Emin emulates his bold line. He’s our contemporary in a way Klimt is not – or so you may think, before seeing their sensual double act.

This was a city where sex was a modern religion. Denial of desire is the curse of bourgeois life, concluded the Viennese doctor Sigmund Freud as he listened to troubled patients revealing symptoms of, he believed, sexual repression. The publication in 1900 of his book The Interpretation of Dreams put sexuality into the Austro-Hungarian empire’s conversation. Yet it wasn’t just Freud who preached the triumph of the libido. Arthur Schnitzler’s plays and stories portray life as a sexual tragicomedy. Even Gustav Mahler’s music is soaked in lush eroticism. Yet even in this ecstatically uninhibited culture, Klimt and Schiele both managed to scandalise.

There are drawings here that tell stories of censorship and martyrdom. Klimt’s sketch for his painting Medicine is a gripping vision in pencil and charcoal. It’s like a dream waiting to be decoded by Freud: a wild-haired figure looks out from a tottering tower of human bodies that crouch, intertwine, embrace and slumber. A skeleton grins in the middle of it all. This flowing opera of sex and death was drawn in about 1900 for Klimt’s biggest public commission, a set of ceiling paintings for the University of Vienna. They were criticised as pornographic, rejected, and almost certainly destroyed by the SS in 1945.

Schiele suffered even more acutely. In 1912 he was thrown in prison, initially charged with the abduction and seduction of a minor. When the case came to court it was his art, not his actions, that was condemned. A drawing was even burned by the judge. There’s no doubt he drew some very young models among his many nudes: the subject of his 1910 portrait Black-haired Nude Girl appears to be of someone in her early teens.

In prison, Schiele drew his surroundings. Suddenly we’re looking not at Viennese luxury but the spartan corridor of a jail where, in April 1912, he observes cleaning brushes, a lamp, water pails and cell doors with an ethereal stripped-down minimalism. The bareness of this image reflects the purified mood revealed by his inscription on the drawing: “I feel not punished, but cleansed!”

It is Klimt who is the untroubled hedonist, indulging his desires with the happy freedom of an artist who could get wealthy Viennese to share their sexualities with him. Women wear dresses that his pencil turns into flowing watery fantasies of abandon. His supple line creates boundless realms of abstract pleasure. But Schiele suffers. “For Art and My Loved Ones I Will Gladly Endure to the End,” he writes on a self-portrait from prison. In it he is a tortured figure with cropped hair, his ears sticking out, his long fingers splayed in agony as he hunches up his body under grey prison clothes. His other self-portraits are also sensual acts of self-martyrdom. He pulls down his eyelid as he draws himself in a stylish headband, giving a twist of anxiety to what might otherwise be a straight portrait. In another self-depiction he sits naked, his purple penis resting between green-tinged thighs, gazing at you from a head tilted almost horizontally.

His acute contemplation of his own physical being is a pared-back reduction of life to its essentials. Showing his meaty crimson back or depicting himself as a hulking monster in a long white shirt, he cuts out all social conventions, costumes, politeness, to strip existence to its most basic elements. He’s in no doubt what those essentials are: sex and death.

A woman reclines wearing black stockings on her thin legs, looking at Schiele boldly, showing her red nipples. It is profound as well as pornographic. The model is bony, her flesh has strange gothic tints. You can see her humanity and vulnerability in this desperately frank record of a real encounter. For Schiele, sex matters because it’s a proof of being alive.

Then, one day, you are not alive any more. Schiele and his pregnant wife Edith both died in 1918 in the influenza pandemic that dealt a final brutal blow to a war-ravaged generation. Klimt had died after a stroke earlier that same year. It was also the final year in the history of the defeated Austro-Hungarian empire.

Yet these century-old drawings blaze with passion for being. Pencil, watercolour, charcoal and gouache on paper – what could be sexier? Nothing, these artists prove.