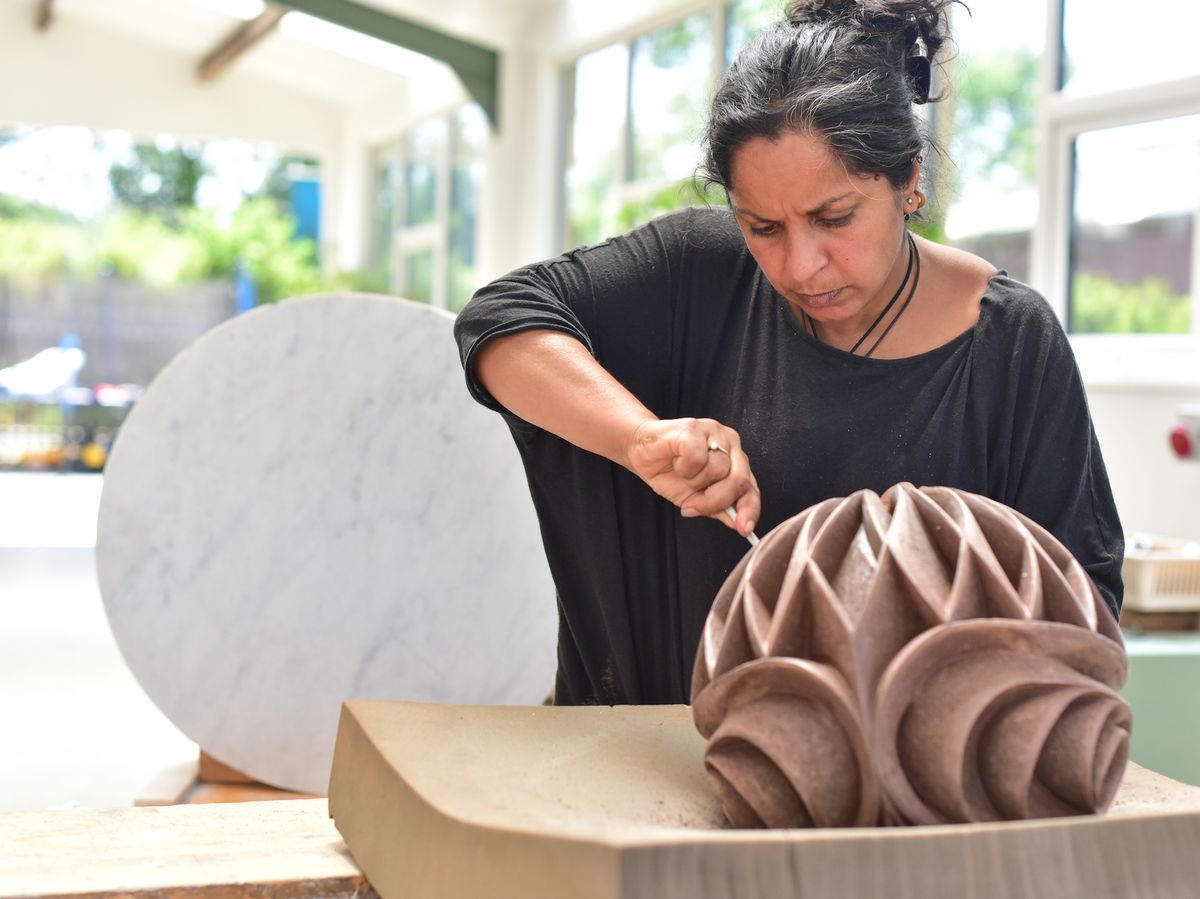 Shropshire artist and ceramicist Halima Cassell was awarded an MBE in the New Year Honours list – and is represented in Shrewsbury’s Soden Collection. Katy Rink spoke to Halima about her journey to success.

Sometimes you just know you are in the presence of very great talent – even if you’re on zoom and the talent has her camera turned off!

Artist and ceramicist Halima Cassell was having problems with her tech when we connected. Thankfully, she has reached a point in her career where she no longer needs to spend her days Tweeting or on Insta and emails, warming up galleries. She just wants to create. And hurrah for humankind that she does, because her output is absolutely stunning.

Halima, 45, pushes clay to its limits – sculpting rather than throwing it into dynamic, three-dimensional creations with strong geometric elements and recurring patterns influenced by Islamic art and North African surface design. She describes her art as ‘sculptural ceramics’ and can work equally in wood, bronze, marble and even glass, transforming it into beautiful, flowing shapes with repeating patterns. She’s never made the same design twice.

Her pieces arouse an irresistible impulse to physically trace the lines. The attraction might be explained by a mirroring of nature’s mesmerising motifs – snowflakes, waves, webs and roots. It’s a kind of ordered chaos that we are powerless to resist.

Halima translates these potent patterns into pleasing 3D structures. Don’t be fooled by her artlessness and soft Lancastrian accent, she’s a mathematical genius, manipulating our physiological responses with her devilishly arousing fractal geometries. Each piece represents hundreds of hours of work – upwards of 280 for the largest (Halima has learned to carve with both hands).

The kiln can destroy a piece in a nanosecond and Halima has had some spectacular breakages. For someone who had just been awarded an MBE, it seemed that she should talk about failures, but Halima believes our mis-steps are every bit as important as our achievements.

Some of her disasters might have derailed a less resilient soul, but Halima chooses to see mistakes as opportunities. Inspired by the Japanese art form kintsugi, when her pieces split in the kiln, she will fill the cracks with 24 carat gold or make something even more remarkable out of the fragments

“I don’t get too upset about it. I always think there’s a reason. Something will come out of it. People responded really well to it, comparing the cracks to stretch marks.”

In 2008, she was preparing for an exhibition at the Hepworth Gallery in Wakefield, readying a commission, meant to represent the old and new buildings at the gallery, when disaster struck: “I’d spent three months working on them but both of them blew up in the kiln the day before the exhibition was due to open. The friend who was will me wanted to cry. I thought I’ll take all the fragments and put them on the plinth. The reaction to the fragments was really wonderful. People saw them as quite beautiful objects in their own right.”

Halima used the fragments as a maquette for a 6ft cast bronze: “The Royal Society of Sculptors asked me to become a member because of that fragment,” she said. “Every cloud has a silver lining.”

Softly spoken Halima moved to the UK from Kashmir aged one in 1976, and has built her career from the ground up (quite apt for a ceramicist). There was no gilded route to success. Her parents died unexpectedly when she was very young and, from the age of 12 to 16, she was brought up in care. Yet there’s not a whiff of self-pity about her: “I was never truly alone – I always had my art,” she says. “Doing art has always lifted me. I always believe in creativity is better than taking medication.”

Her ‘inspirational’ secondary school art teacher helped her get onto a BTEC in Art and Design at Blackburn College in 1994 – and gave Halima her first commission!

“One of the biggest things for me has been having people believe in what I do,” she says. “That meant a lot, having that kind of emotional support.”

She went on to study for a Masters in Design at the University of Central Lancashire, where she first begin to carve into clay, developing her distinctive, geometric style. She almost followed a career in mental health, but resisted the urge to swap her art for a steady salary and settled instead for a one-bedroom flat in Blackburn.

It was in that tiny space, that Halima made some of the most significant early pieces of her career – including one for the V&A museum and a commission for the Hepworth Wakefield.

“A lot of students seem to think they need a big studio to be successful,” Halima says. “I tell them a lot of pieces were made in that flat.”

It was around this time that Halima was advised to get elocution lessons to help her navigate the art world: “I said I don’t want people to look at me, I want them to look at my art.”

The editor of the Ceramic Review was so impressed with Halima’s work, she put her on the front cover of the next issue (2005). Residences followed in Japan and Tuscany, where she learned to work with Carrara marble. She was made a fellow of the Royal Society of Sculptors in 2016 and had a very successful major solo exhibition in Manchester in 2019.

“Seeing the response of people at my Manchester exhibition was overwhelming. It lifts you as an artist and makes you believe in what you are doing,” she said.

Her public art can be seen in Blackburn, the Forest of Bowland, on a sculpture trail in the Ribble Valley, Leicester, Nottingham and Liverpool. She undertakes high profile commissions, including works for New York interior designer Ronald Bricke and Queen Rania of Jordan and her pieces have been bought by major museums.

Halima has earned her stripes as one of Britain’s best contemporary sculptors. Developing her distinctive style has been a slow journey. She was inspired by graphic artist and master of illusion M.C. Escher and English op art painter Bridget Riley to use mathematics in her art to create a sense of movement.

“I didn’t consciously adopt this style,” she explains. “I was inspired be Geometry and Architecture and my own cultural heritage. I have always followed my interests. I am quite heavily dyslexic and was never very academic but Maths and Art were the things I was good at. If I had thought about my style I don’t think it would have happened. I’ve loved the journey I have been on. It’s been slow and deep and meaningful.

“When I was young the thought of just being about to do art would have been satisfactory. I didn’t ever aspire to massive goals. I would never have dreamed of having a massive studio and an MBE but it is nice to have that recognition for the hard work I’ve put in and also for the Visual Arts – art is like beautiful music, it lifts the soul.”

She’s delighted to have found herself with a big studio in the tiny Shropshire village of Broome, near Craven Arms, in a converted railway goods store – the 1980s house is no great shakes, she says, but the outside space and workshops are perfect and her students can catch a train almost to her front door. When work comes back from an exhibition, she’ll show it in her garden. Her partner Martyn has been looking after the home schooling of their two children, aged five and 10, whilst Halima creates – she’s just provided the drawings for a landscaped design wall at Preston University and would love to do something similar here in Shrewsbury to cement her connection to Shropshire! It’s also looking likely that her exhibitions at Glyndebourne and Pangolin London Sculpture Gallery will be back on this year and there are a few big commissions in the pipeline.

Taking time off never comes easily, but with so many cancelled exhibitions, Halima has had time to rethink her priorities – and spending less time at the computer is top of the list!

“Even with what’s gone on, we can all find positives. I’ve had time to go on lots more walks. We’re lucky to live in such a beautiful area of Shropshire. It’s like a hidden secret county of England.

“It’s been a luxury. I’ve always been either working or studying. It’s been nice to be at home with the children without the pressure of lots of deadlines. Things are starting to roll on again now.”

Halima is collecting clay from every country on the planet for a long term project Virtues of Unity. With each piece, she makes an unglazed, spherical ceramic vessel, each varying in tone and texture with colours ranging from deep terracotta red, to stark black and white and every shade of ‘earthiness’ in between. She has done over 40 so far, so still has some way to go to collect from all 195 sovereign states. Friends and fans are helping by bringing back lumps of clay from their holidays in suitcases! This year, Halima has India and Iran in her sights. Each of the pieces is called after a virtue, such as ‘Giving’ ‘Caring’ or ‘Trust’.

The whole is a reflection on the shared commonality of the human race – and keys into the artist’s understanding of ‘belonging’. As a woman of Asian origin living in the UK, she always felt an outsider and was looking forward to returning to the country of her birth, Pakistan, on a return visit in 2009.

“I thought it would be a great homecoming. But everywhere I went, I was always introduced as a foreigner,” she recalls. “It got me to think deeply about where we come from, where we belong and the things that are similar about all of us.

“Regardless of religious status, or background, we all have similar virtues that are inbuilt into our being. It’s the same with the clay, the raw material is the same, but depending on where you dig it out from, the texture or colour will differ. People really relate to the installation. They want their country to be a part of it.”

After 25 years finessing her craft, Halima will share her journey in a new coffee table book, due out this springHalima Cassell 25 Years of Carving.

“I wanted it to be for as wide an audience as possible,” she says. “It’s a catalogue, a reference book, a biography, about history, working process, travel, my influences – all those things. I don’t ever make my work according to a specific fashion or client. I want it to be interesting for students to look at my working process, the early stages of my career, my studio spaces, showing the journey and transition of my work. I hope they will find it inspirational, understanding how I managed to carry on the creative process.

“When I tell them they can’t expect to make a living being an artist for the first 10 years, some of their jaws drop. Unless you are very lucky and come from an affluent background or are picked up by a great agent, you have to be more realistic about the journey. It’s not about overnight success. It’s about being real, being patient and creating something deep and meaningful, rather than what’s selling or what’s fashionable. Beautiful art or architecture doesn’t belong to any era, it will stand the test of time and I want my work to be the same.”

Written by Katy Rink, Editor of My Shrewsbury Magazine.